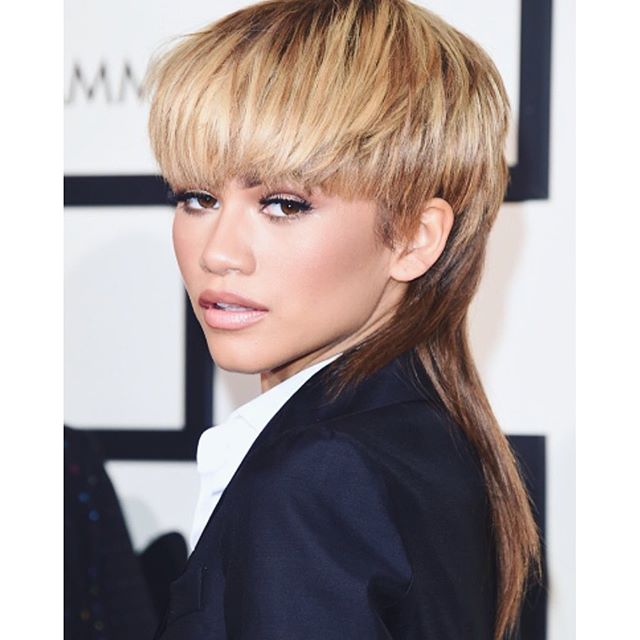 Leave it to actress and singer Zendaya Coleman to rock a hairdo that’s older than she is to the Grammy’s. On Monday, Feb. 15, the 19-year-old trendsetter channeled an 80’s ’do, the mullet, at during Monday night’s Grammy Awards show by sporting short blonde locks in the front and a long ombre-brown mane in the back. The “KC Undercover” star completed the look with a black Dsquared2 tuxedo and an over-sized silver watch.

“It’s very inspired by menswear,” Coleman told E! News of her throw-back threads. The new face of CoverGirl also revealed she did her own makeup, keeping it natural with a nude lip and light eye shadow. Naturally, it didn’t take long for social media to share their thoughts on the rising stars look. “Zendaya’s rocking a mullet #LeaveBillyRayAlone,” tweeted Chrissy Garcia, referring to the country singer known for exemplifying the popular 80’s look.

I love that @Zendaya is the only person in the entire world that can pull off a mullet. #RESPECT #GRAMMYs pic.twitter.com/NlhilwPzdz

“Zendaya got a mullet and still slays this girl can wear anything,” tweeted another user named Solpreme. Others weren’t as impressed with her new look. “Zendaya I love you, but get rid of the mullet,” tweeted Kristian Galva.

Needless to say, as one user put it perfectly, “You don’t have to like Zendaya’s hair. She didn’t do it for you. She did it for Bowie.” As a tribute to the late musician, the star showed up and showed out and we love it!