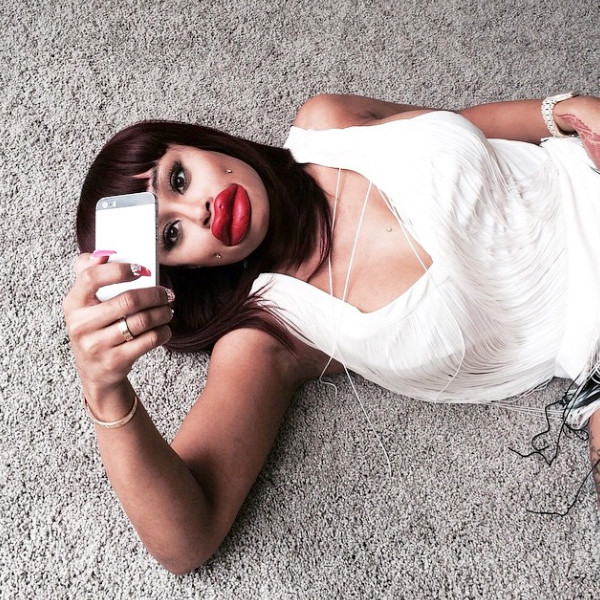 Tyga’s ex Blac Chyna is throwing shade at his rumored girlfriend Kylie Jenner, again. Earlier today, the former stripper mocked the #KylieJennerLipChallenge when she posted the above image via Instagram, wearing what appear to be the ultimate duck lips.

And she didn’t have to say much, before followers knew exactly what she was getting at. Keeping the selfie caption to a minimum, Chyna added just a lip emoji. She later followed up with an additional snap featuring just the lips and the caption, “Will be available on @88_fin.”

While Blac Chyna clearly isn’t feeling Jenner’s look, teens across the internet decided to initiate the #KylieJennerLipChallenge on Twitter Sunday, in which they put “a glass over their lips to create an airlock on their skin for as long as five minutes,” according to MTV UK News.

The desired effect is to achieve a look similar to Jenner’s voluptuous pout. However, the results ranged from a variety of purple and red bruising and popped blood vessels. In other words, it’s not worth it. In light of the negativity surrounding the challenge, the “Keeping Up With The Kardashians” star took to Twitter to respond. She tweeted…

I'm not here to try & encourage people/young girls to look like me or to think this is the way they should look. (Cont…)

I want to encourage people/young girls like me to be YOURSELF & not be afraid to experiment w your look.

What do you think of #KylieJennerLipChallenge? Just fun or have there teens gone too far? Sound off in the comment section below!