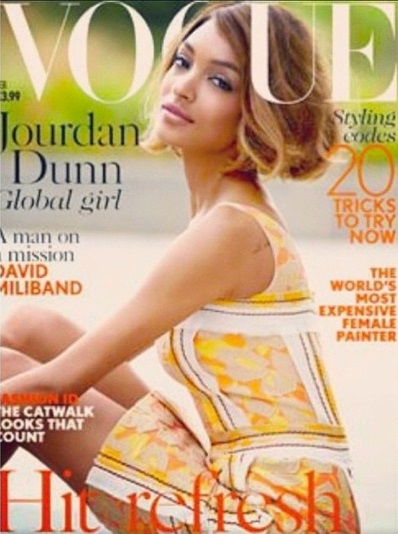 “I’m so Happy to finally say I’M ON THE COVER OF BRITISH VOGUE!!! Thank you @britishvogue ,Patrick Demarchelier and Kate Phelan for making this happen and also thank you all for the Love and Support it means everything to me #2015YearOfTheDunn.” She wrote.

Although this is Dunn’s first solo Vogue cover, the 24-year-old catwalker previously fronted the magazine in 2008 alongside Rosie Huntington-Whitely and Eden Clark.

The Londoner’s stunning cover also marks a change for the fashion bible as it is the first time they’ve featured a solo black model on the cover since Naomi Campbell graced the pages in 2002.

Dunn began her career at an early age after being spotted in a Hammersmith Primark in 2006. She was later signed to Storm Model Management.

Since her discovery, Dunn has worked for designers such as Calvin Klein, Balmain and Topshop. Last year, Forbes dubbed her the 10th highest paid model, making an estimated $4m in 2014, beating favorite Cara Delevigne, who earned $3.5 million.