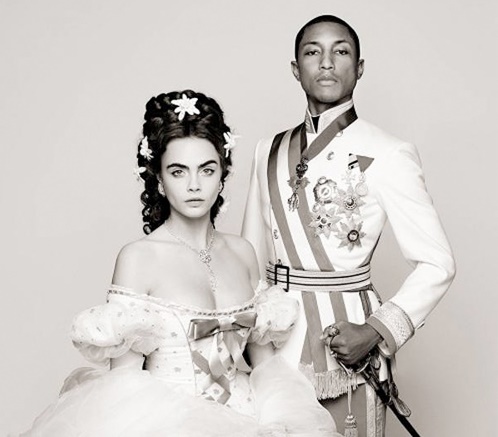 Hit maker Pharrell Williams earns his acting stripes in a short film for fashion powerhouse Chanel, directed by Karl Lagerfeld. The clip titled “Reincarnation,” also starring supermodel and Rihanna’s bestie Cara Delevingne provides a sneak peek into the origins of the luxury line staple pieces including “the Chanel jacket, inspired by the one worn by the lift attendant in a hotel near Salzburg in the 1950s.” Lagerfeld said.

“None of this would have been possible without Pharrell Williams, Cara Delevingne and Geraldine Chaplin. It’s the perfect cast. Pharrell is a genius and Geraldine at her best in the role of Gabrielle Chanel in the year of her comeback.” He continued.

Williams will also serve as the face of the upcoming Aris-Salzburg 2014/15 Métiers d’art collection campaign, alongside Delevingne.